In recent articles we discussed how the adoption of a high flow/high pressure strategy in the cardiovascular system of the horse has enabled it to become recognised as one of the greatest animal athletes through superlative oxygen transport.

We also learned the rate limiting step in oxygen delivery is the rate at which oxygen moves from the lung tissue into the blood.

In this final article we examine the mechanisms of disease that impact on how well the horse can load up on oxygen in the lungs.

As you will recall, oxygen moves from the air sacs (alveoli) in the lungs into the blood contained in the tiny blood vessels wrapped around the alveoli.

Even though the membranes of the cells that make up these structures are very thin, it still takes time for the oxygen molecules to pass through the membranes and then be picked up by the haemoglobin molecules inside the passing red blood cells. See the below image for details. 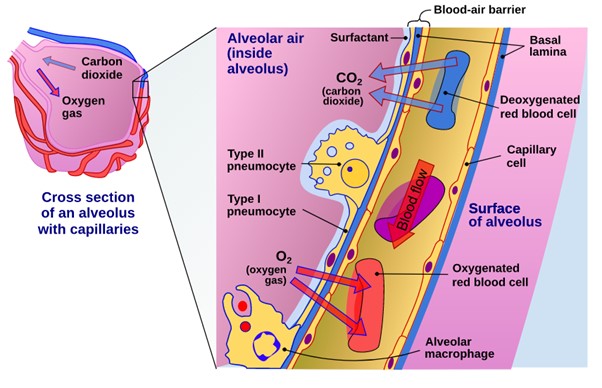 Once the concentration on either side becomes equal then diffusion through the membrane stops. It takes about half a second for this to occur in a healthy horse lung.

Anything that increases the distance that the oxygen molecules must travel or decreases the concentration gradient will make it harder for the horse to acquire enough oxygen to maintain optimal exercise performance.

Anatomic abnormalities of the airways

A racehorse moves 50-60 litres of air per minute when at rest but up to 1800 litres per minute when racing. That is an astounding 30-fold increase and leaves little margin for error.

Structural abnormalities in the respiratory tract will slow the rate of air movement. This means that any abnormality, such as collapsing nostrils, dorsal displacement of the soft palate, left laryngeal hemiplegia etc will reduce the amount of oxygen that is supplied to the alveoli.

This reduces the “steepness” of the oxygen gradient between the alveoli and the blood in the capillaries and reduces the all-important exchange of gases that must occur if a horse is to perform competitively.

Inflammation in the lungs

The lungs have a very active immune system that is always ready to respond to the challenges of breathing in air from the environment.

Increases in immune cell numbers and fluid production is part of the immune system's defence (think of how you get a runny nose when you get a cold). Even mild inflammation in the lungs is likely to result in increased fluid sitting on the surface of alveoli cells.

This means the oxygen molecules must now pass through this layer of fluid as well as all the cell membranes to get into the bloodstream.

This increases the distance and time the oxygen molecules must travel to reach the red blood cells in the capillaries.

Inflammation in horse airways commonly occurs due to allergic reactions (pollen and dust in feed stuffs), physical irritants (such as ammonia from urine) and viral or bacterial infections.

The pleura is a special double layer membrane that lines the chest wall. It has a tiny amount of fluid between its two layers. It allows the lungs to move independently of the chest wall.

Any abnormality of the pleura, such as inflammation (pleuritis) or scarring (so the pleura sticks to the chest wall), stops the lungs inflating in the affected area.

Fresh air does not get to the alveoli around the damaged pleura, so the oxygen gradient is not created, and oxygen does not flow from the alveoli through to the blood stream.

Free fluid in the lungs

Not surprisingly, if the alveoli are full of fluid there is no air and therefore no oxygen gradient. Fluid can form in the lungs from severe inflammation.

As discussed in the article on the respiratory system, there is also some "normal" movement of fluid (plasma) from the surrounding capillaries into the alveoli due to the high blood pressure created by the massive equine heart.

Blood filled alveoli cannot contribute any oxygen to the exercising horse so there is a direct relationship with the amount of bleeding in the lungs and impact on the horse's performance.

Free blood is also highly irritant to the surrounding lung tissue and will provoke a severe inflammatory reaction.

If persistent or repetitive bleeding occurs, scarring and chronic inflammation can develop. This reduces the lung’s overall volume and oxygen exchange capacity.

Unlike the cardiovascular and musculoskeletal systems, the respiratory system does not respond to training.

Optimising the performance of the respiratory system in the equine athlete is all about management.

This is achieved by minimising EIPH events through judicial training programs and ensuring the horse is not exposed to unnecessary allergens or respiratory tract infections.

Planning horses' management and careers with the respiratory health in mind will optimise the performance of the vulnerable respiratory system.